Tonight I came home from the gym to this: 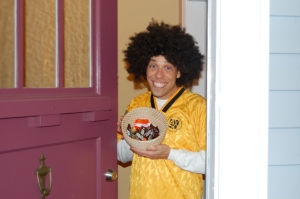 And this was on the porch: 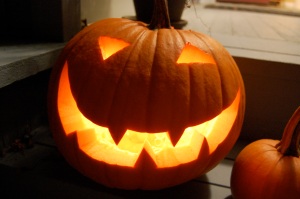 I’m not much one for Halloween–especially since my mom stopped sewing my costumes–but my boy drove home two hours to pass out treats on our front porch.

For the first time in his life.

His big grin waited for me at the front door when I got back from the gym (working off all the candy I’d consumed–FOUR pieces ONLY!!)

“I saw a Smurf!” he cried, giddy as the kids loading up on Milky Ways. “And Mario and Luigi, and a fireman and we only have twenty pieces of candy left, and did you see Pumpky?” he asked.

He wanted to roast pumpkin seeds and still, despite no trick-or-treaters for over twenty minutes, he’s wearing his afro. He has checked on his jack-o-lantern every ten minutes.

It just reminds me of the joy of something new. Of participating in something, no matter your age, because you’ve always wanted to and never had the chance.

At my house, we never had enough candy and my mom, despite Halloween being her favorite holiday, was known for doling out toothbrushes, apple slices and raisins. Some years she decked the house out better than the local haunted house: a one-eyed monster in the doorway, holding a jar of eyeballs, a bat on his shoulder, another suspended from the ceiling, brains sliding across a table, apothocary jars with gizzards and newts and my mom passing out whatever “treat” it was that year, that cackle at the ready.

Have you heard my mom cackle?

She has to cross her legs when she does it; it’s so loud she sometimes pees in her pants. And the cacophony frightens me every time, even when I know it’s coming. It’s that good.

She called to chat with N. She is pissed that she only has three trick-or-treaters. N is trying hard not to dwell on the fact that he’s passed out bowlfuls.

So next year, I will decorate a bit, for mom. I will put on something silly for N. I will carve “Pumpky” for me. And have a bit of fun for all of us. Cause I’m not past fun, right? And how can you say No to a face like this?