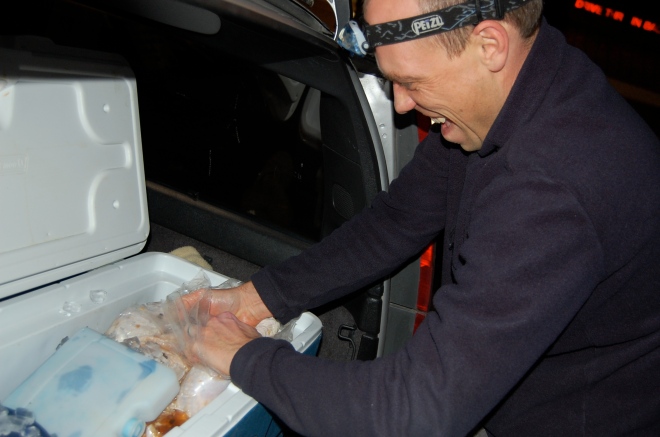 I know you can’t believe it: when I finally post after damn near eons I’m going to make a Mitt reference and give you the 411 on some drab house-hold item? Just you wait, my friends; this will be the tale of intrigue, imagination, ingenuity and of course, a chuckle over the endearing ways of my hysterical husband, N. Remember this “bread” debacle?

N and I had a Thanksgiving date with the Ferrells, Interstate 5 and 12 hours of traffic. After a half day’s worth of work, the boy and I divided and conquered: I would gas up The Silver and he would brine the turkey. (This is where I should have smelled the sour odor of chores gone awry: N in the kitchen and me at the car? Huh– Nevertheless, I came home to a packed cooler; we loaded up the car and dashed, only to sit and sit and sit in mid-day traffic on our State’s only  coastal artery.

N mentioned, somewhere around Seattle, that yes, he had brined the turkey–in its’ plastic bag–and yes, the giblets and neck were stiff frozen and shoved in the carcass. “The brine will defrost it and I’ll pull it out when we stop.” True enough.

Cue the stop: seven p.m. (six hours of driving and still not out of the state). We’ve gassed up the car and pull into Safeway to snag some ice for the cooler. N decides that he will pull out the giblets and neck.

“Nawh. I’m just going to reach in and pinch out the bag.”

“No. You’re gonna wash your hands, right?” I feel my teacher index finger alert and point like a blood hound. “The bathroom’s in there, to the left.”

He concedes. Returns. Dons his headlamp. It is dark, remember? And we’re in the Safeway parking lot, remember? In the second stall, close to the entrance…for all those last minute shoppers to gawk and realize, “Hey, I’m not in such a bad spot: look–these dorks are pulling giblets out of their turkey in the middle of a grocery parking lot.”

N and I–we’re always tickled to make others feel better.

N rolls up his sleeves and switches on his headlamp. We remove carrots and celery and sage from the top of the cooler, and there is our turkey–brining, floating in a vat of plastic encased water; peppercorns and cloves, salt and orange rinds undulating around it like some Aphroditian bath.

And that plastic bag? Yep. Closed shut with binder clips.

Binder clips. To seal a plastic bag holding a gallon and a half of water, laying horizontally.

It will remain one of the great shames of my life that I do not have a photo of that particular Ferrell fix.

To his credit, it was holding, and to his credit, he’d had the foresight to prop up the bird with a colander, so the whole thing didn’t tip over.

And then he fetched the giblets.

I  had the camera out at this point–we’re in the parking lot with headlamps with hands shoved up a turkey’s ass. The guts were stiff frozen inside. N’s hands were freezing, his headlamp shaking with fervor. “Grrrr…ahhhh….gaaahhhh!!” He stood in a lounge, as if he was a gladiator going into a war in Antartica…with a dead bird. There was so much grunting, I’m sure several passersby considered that one of us was giving birth, but then, I stood alongside, laughing so hard that I couldn’t even hold the camera still enough to shoot. So, the flesh wasn’t coming out of me.

Finally, after some serious hand warming and lamaze breathing, N ripped the guts from the bird. I think I recall a large suctioning noise. Slup. “It looks like afterbirth,” he said.

Thank goodness we had retrieved a monster-sized paper cup from Safeway, cause isn’t that where Martha stores her gizzards and hearts before cooking them? Now, with turkey-laced (and washed, thankfully) hands, N began the process of re-binder clipping the brining turkey.

We made it to Oregon after midnight and cooked one hell of a bird, innards and all.

Lest you think I condemn my husband’s ingenuity, I have taken to seeing the binder clip in a whole new light. Sure, we’ve always used them in the kitchen for chip clips, but just last night, when the parchment paper wouldn’t stay down in the loaf pans–voila! A binder clip on each side’ll do’er.

A binder clip to cinch together all those escapee half empty nut bags in the bottom of the freezer. A binder clip to hold open the cookbook page. One to hold my stirring spoon off the counter; two to rest my laptop on. One to clamp down my Tom’s tube. A solution–finally–to the damn wet brillo pad mess: a binder clip hanger! I’m going to hang one from my headboard to hold my phone changer tail and here’s a tip for using binder clips to slip on your duvet cover.

It’s difficult to tell now which humble, unassuming guy is more brilliant–this one:

Three cheers to them both!