We’ve had some activity up here in the Pacific Northwest: there’s been a jaunt to a foreign country (though if it’s part of NAFTA, it doesn’t really count. However, it did climax in the first stamp in my virgin passport, so hey, Mexico, I guess you’re good for something). N has acquired a job. The freaking sun is supposed to show her face this weekend and–dare I even say it–hit eighty degrees?

And there’s been the purchase of a house. She’s an oldie but goodie. She’s got a porch. 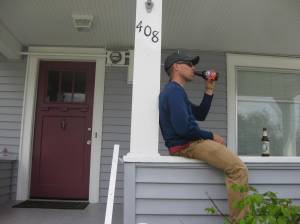 So last week after a few chores, N and I sipped our first Porch Beer. I can’t think of anything–let me repeat–anything that would make my summer more complete than sipping multiple Porch Beers while reading a book.

And since I only have NINE days until that blissful time, I’m querying the masses: what beer, what book? You name ’em, I’ll drink ’em and read ’em. I’m going to track the best combo. Because I really wonder, does Emma pair better with an IPA or Amber? I’m sure David Sedaris  requires a hard cider but he might be an evening porter too. One can never be sure until I hang up the hammock (that bastard of a beast I carted around Costa Rica in ’06 and in every domicile since, without space to hang it, mind you) kick my feet out and revel in the glory of what is a century old porch on a quiet, small-town street.

Help a Porch Sista out–what am I missing?

3 thoughts on “It’s Gonna Be a Thing”