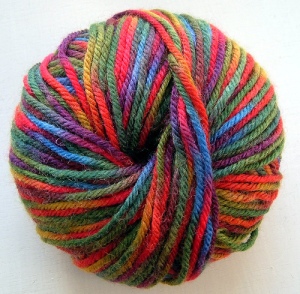 Remember eons ago, when Mom strung yarn from our bedroom doors down the stairs, outside around the tree, through the garage, over the washer and into the dryer to hide our Easter baskets? You loved following that thread, sometimes so intently, you’d bump into Jessica or Torrey, all of you with your heads down, wandering alongside a string. Lately, you’ve noticed a similar skein laced throughout your life; you’ve stepped alongside that thread until, low and behold, you’ve stumbled upon the whole ball of yarn.

It’s this idea that’s unraveled, the one about having less stuff. Having meaning with the stuff you do have. Loving what you have more instead of loving needing more stuff. When you trace the string back, you know that leaving the country for nine months and shoving all your shit in Mom’s garage and then carting around a yellow and black backpack was mostly about doing more with less shit. (That, or having an illicit child in some third world hospital.) It was like you attempted to do this without even knowing it.

At the same time, Mom and Dad moved out of the gigantor house in Agoura. Gone: Mom’s walk in closet, a third of the size of your bedroom. Gone: the black-bottomed-pool that you thought for sure had girl-eating sharks in it. Could you live without these amenities? Some part of you thought that when your parents moved to New Mexico, they would miss the rigor of keeping up with a Southern California lifestyle. Dad, though, told you that one of NM’s best features was the fact that nobody cared what the neighbor drove, or if their purse was Coach or TJ Maxx. And you could hear years of exhaustion lifting off of him when he said it. Up here, in WA, you don’t have to keep up with the Jones’ either because 1) you no longer live in the same zip code and 2) your Jones’ are actually sublime role models on how to live a modest, meaningful life.

However, at your new school, students comment on the number of clothes you own. “We’ve never seen you wear the same outfit twice.” (You’re delighted they pay such attention to your wardrobe. If only they’d scrutinize the comma rules with such detail.) A rush of Catholic guilt sweeps you when you hear this. Have you squandered too much of your (albeit, hard-earned) money on frivolous Cambodian-made clothes so that you won’t repeat outfits? 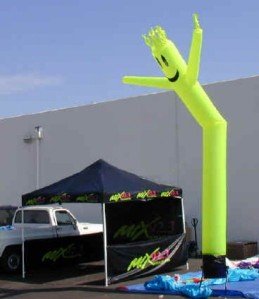 They are called "Air Puppets" if You Ever Need to Know. Or Really Scary Waving Things

And, this wanting more but needing less waves its ugly self around daily like one of those inflatable car-sales-tube-dudes as you contemplate your future marriage.

See, there’s this Beast, the Wedding Industrial Complex, as some so lovingly refer to it. The Beast’s glimmering fangs demand that you have letterpress invites gilded in gold. The Beast’s sharp scissoring claws command a three to four tiered cake dolloped in lacy scallops. The Beast’s beady, soulless eyes scream that if you don’t coordinate wedding colors, your marriage, your vows are doomed. And, worse yet, if your bridesmaids’ (of which there will be none) dresses are not of said color scheme, The Beast guarantees to ride in on his dragon and slay the pretty, nearly wedded bride.

But it’s so not you. Or rather, the you you’re trying to be. The you you left the country to find. To bring back in your black and yellow pack. And it’s not N, either, which endears you to him. And so every time you think, Oh! I must have this bolero made to go with my dress, consider that you’re feeding The Beast. Giving him what he wants. Making his skin reptilian and impenetrable and North Korean-like. Because the messages to buy more and spend more and do more just keep coming. And yes, you’re partially to blame: you love pretty things. You want pretty things.

But the best part about your upcoming marriage is that the man you’re marrying reminds you that you don’t need these things. And with him, you can feel safe knowing your wedding will not be about a sparkly tiara or carefully calligraphied invites or even table escort cards. In fact, it will be about the smiles on your faces. And your guests’. And the joy in your hearts.

The joy of Easter morning did not arise from the goodies in the basket, but from your journey to find them. Now, planning a wedding, journeying along another winding thread with N, you find the same thrill. And when you stop to think about it, between wedding blogs and Martha centerpiece craft instructions, you realize that even if you purchase glittering earrings, they’ll never light up your life as much as N’s smile. Because the best things in your basket—or in your marriage—will never be purchased.

5 thoughts on “A Letter to Myself, From Myself (how self-centered!)”